A/Vgration is a reactive audio/visual work in two parts made in collaboration between Hannes Andersson and Valentina Sutti.

Hannes Andersson
We arrive somewhere; our previous destination is still with us. 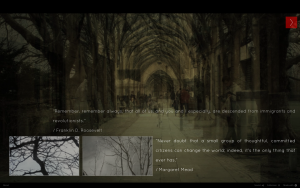 With our eyes we scan the geometry and the stream of constant motion. People coming. People going.
We have experience of other places. Other people.

We might project that experience onto this new environment, as understanding becomes the comparative process of an outsider.
We compare the people that we see, to the people that we know. We might judge them. We might leave at this point, satisfied with our interpretation.
But yet, we do not know these people. Not yet. We have not learned where they are going or how they fill their days.
If we stop and engage with this environment; if we mind the minute particularities, we might find something else, invisible on the surface.
Unique lives and individual stories.
We might listen to these stories. 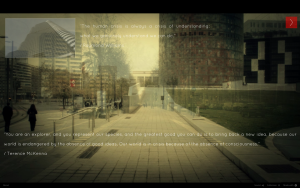 We might allow them to enter us.
Some of these stories might leave an echo that lingers as we move on to the new yet unknown.
At one point you might find yourself back at where you started, in an environment that we once thought we knew so well, yet now: an ever so familiar sensation of unfamiliarity.
It is unfamiliar because we have changed. It happened so gradually that we might not notice until confronted with the strangeness of home after so many futures passed.
Because like us, our synapses have learned new roads, new ways of navigating the ever-changing landscape of our plastic brains.

The scenarios in this piece have been recorded in Berlin, Barcelona and Cambridge. I chose these places because this is my trajectory. There have been other places, other continents, other lives, but these three hold a special significance for me.
Berlin: The first Other, feeding curiosity in a gloom-eyed boy, who just had gotten introduced to Kerouak.
Barcelona: Where I found myself, found love and direction.
Cambridge: Familiar but still unknown, still not mine.
There was also the beginning, Gothenburg, but that is a different story altogether. 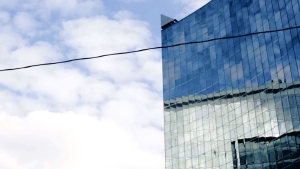 There is an immigration that we don’t see, we don’t smell or taste, and most of the times we don’t even hear it as it’s a private one. It’s a world of slight noises and interferences where the words rebound from building to building to disappear in a distant echo. In this hidden space people communicate, share feelings and fears. It’s a dense migration.

Toronto is suspended in an intangible world where these words run quickly to reach their destination. I asked all the people that left their countries I know to call their families or friends or partners and to record the conversations and send them to me. These conversations are the soundtrack of the video. Sometimes they are stronger sometimes they are just a little voice in the background covered by the noise of the city. I also asked the same people to write in their languages ten sentences that come up to their minds when they call home. I started to collect them and study them. 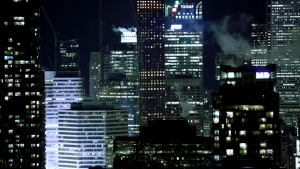 Some of them are hilarious “Käse ist schweineteuer. – Cheese is so damn expensive” or ” Wieso sind eigentlich alle hier so freundlich? – Why is everybody here so friendly?” others are intense “Λένε ότι δεν καταλαβαίνουμε τον λόγο του ταξιδιού σας. – They say, we do not understand the reason of your journey.”
I showed them in different ways. I animated them, I used them as sounds, I inserted them into frames with different opacities. They are, whether they are visible or not They are still there.

Whether they are understood or not, these words cross everywhere. All of them are migrant and they migrate. They are strong and determined. They fight with noises, interferences, and electricity just to arrive to the other side and to exist.

Hannes Andersson
Hannes Andersson is a digital artist, filmmaker and researcher, born in Gothenburg (Sweden) and currently based in the UK. He studied Digital Film & Animation at SAE Institute Barcelona (Catalonia). Hannes is co-founder of the digital art collective Chinos International CC, centered on the development of interactive art and open source technology and a resident artist with the European Art-Science-Technology Network (EASTN). He is director and co-founder of the independent film group Anderson Rodriguez Films, mainly producing digital video and narrative cinema shorts for distribution online. His artistic work focuses on perception and communication in the in-between of art and science and has been presented internationally at events like Sonar (Spain), Mutek (Spain), Opus (Belgium), Skepto International Film Festival (Italy) and Mumbai International Film Festival (India).